Embattled former CEO Richard Scrushy sets the record straight in new memoir It Should Not Happen in America: From Selma to Wall Street —‘A Journey of Fire and Faith’ 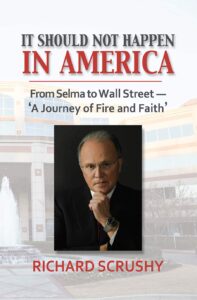 Montgomery, Ala: Richard Scrushy left behind a successful career in medical education to follow his dream, building a healthcare company the likes of which had not been seen before. That company, HealthSouth, would grow at an exponential rate, launching Scrushy into a position of stature and importance. Scrushy’s role as HealthSouth CEO, however, put him in the line of fire for two politically motivated prosecutions and his eventual imprisonment. It Should Not Happen in America is Scrushy’s warning that the American justice system can be corrupted to bring down an innocent man. Scrushy’s memoir is infused with his devout faith in God, wisdom in the realms of business and finance, and indignation at the miscarriage of justice that took him from his family for five long years. He corrects the record on his torturous journey from being one of Alabama’s most celebrated sons to one of America’s most tragic victims of legal malpractice. Scrushy’s heartfelt account gives an insider perspective on two of the most discussed and speculated-on legal battles in the history of Alabama and the nation. Above all, It Should Not Happen in America is an inspiring story of faith and principle that describes the important influences—his love of family, the importance of church— that shaped Scrushy’s life and career. It’s a book rich in insights about how a humble man achieved much in the complicated world of business.

Richard Scrushy worked his way through college, where he studied respiratory therapy. He headed a division of a national hospital company before founding HealthSouth. In 2005, he was tried, convicted, and sentenced to prison for bribery in connection with then-Alabama governor Don Siegleman. Released in 2012, he remains in demand as a business advisor and speaker on leadership, entrepreneurship, and economics. In addition, he continues to serve in ministry.

It Should Not Happen in America is available through your favorite local or online retailer. Retailers, contact Ingram Publisher Services (IPS) at 866-400-5351 or email at ips@ingramcontent.com, or order via ipage.ingrambook.com. Trade Cloth; ISBN: 978-1-58838-439-3; 192 pages; $27.95. For more information: newsouthbooks.com/ scrushy.

Buy it now on Amazon